Drawing to my guitar playing 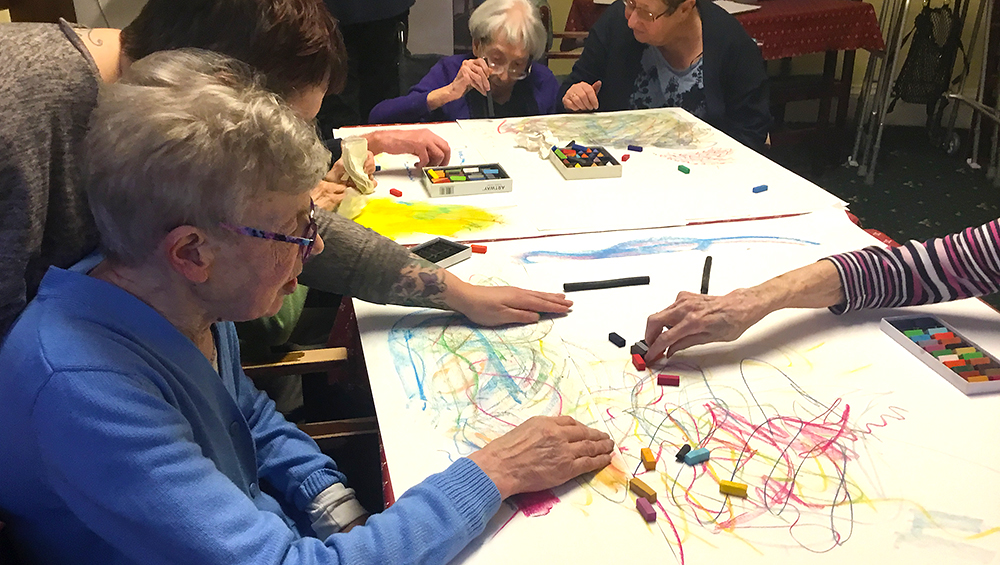 We tried a new approach.  In the second group of sessions with our care home project, four groups of people made sketches while listening to what I was playing on the guitar.  We had already talked about Kandinsky, a famous artist who painted music, so people embraced the challenge.  We had warmed up previously with making marks and getting comfortable with the process.  This was a first for me, so I had no idea how it would pan out, but when I started playing people really responded to having a purpose to their mark-making – to draw the music.

It felt very exciting that somehow what I was playing was influencing what people were creating on the canvas.  One man was really concentrating on capturing the music and produced interesting lines, dots and larger circles choosing beautiful colours.  Other people started with big thick lines of colour and charcoal.  I was struck with how much bigger the boundaries of their work were.  It was as if they felt more confident and relaxed to make larger flowing marks.

I played two pieces of improvised music, the first piece was at a quick tempo with lots of movement and the second piece was slower with more space in between the notes of the melody.  People responded to the two pieces of music and the drawings they made did reflect the different moods of the music.

Each group was working together on a large piece of paper.  The only boundary in the whole project is to work together as a collective.  Even though people were focusing on their contribution, it was a real social space as people interacted and encouraged each other.  It felt like we were truly working together to explore our creativity and make some great marks.